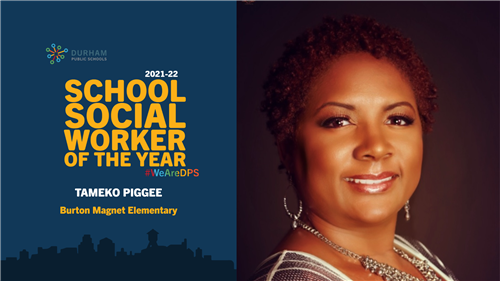 Tameko Piggee (pronounced puh-GEE) has spent four years serving DPS’s students as a School Social Worker. She’ll start the fifth year as the district’s School Social Worker of the Year.  Piggee brings her years in child welfare and as a behavioral health specialist in pediatric primary care to school social work. There is no question that she is credentialed: she has earned two Master’s degrees and a clinical license, and she shares her knowledge as an adjunct professor teaching sociology at the undergraduate level. But it was a personal experience that drew her to school social work.

When her husband passed in 2008, she said it was a school social worker who walked the journey with her and her two sons.

She made such an impact that when School Social Worker Week was observed, her school surprised her with a mini-assembly, and students mustered the courage to take to the stage to share what she meant to the school community. That gesture wasn’t lost on Piggee.

“It means the world to me. It made me realize that they have poured into me just as much as I have poured into them.  School Social Worker of the Year means that I need a bigger cup because my work will continue on as the need for social-emotional support keeps growing,” she said.

Her objective is forthright: “I believe that everyone deserves a chance to succeed and it is my responsibility as a school social worker to always help strengthen the pathway towards reaching their goals.”

What she also knows is that school social work is reliant upon teamwork.  She appreciates the support she receives from the school counselor, Ponsella Brown. Al Royster, her Director of Student Support, and the social work leadership team keep her and her colleagues informed, educated, and motivated. And at Burton, where she enjoys a family-like environment, “it’s the buy-in that makes a difference,” she said. “I come up with an idea and no matter how far-fetched it may be, they give me a chance to present the vision.”

As a leader in school social work, Piggee advocates for one social worker at every school to allow them to build the relationships they need to have with parents, staff, and students. She also believes additional state funding would increase effectiveness.

In order to do her work and show up as the leader that she is, Piggee also believes in self-care.

“I can’t pour from an empty cup,” she said. And her personal creed is much like her social worker’s creed. “I also keep a circle of family and friends to help remind me of the need for self-care.”