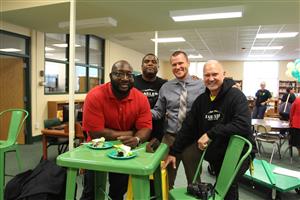 Even though it was a day late for Halloween, Neal Middle School principal Dr. Michael Fuga was tricked into calling a staff meeting by his assistant principal.  The trick turned out to be a treat. Little did he know that the staff meeting was a ruse to surprise him with the announcement that he is the Durham Public Schools Principal of the Year for 2018.

“This award is not just for me, it’s for Neal Middle School,” a very surprised Fuga told his staff. “Durham Public Schools is recognizing the hard work the teachers and students have put in to make Neal a better school.”

Fuga became principal of Neal Middle in 2015. He started his teaching career in Durham there, but left the school to pursue his master’s degree at UNC Chapel Hill and start on the path to administration.

“Returning to Neal was a choice I made because every student and community deserves a school in which they can believe,” said Fuga. “At that time, Neal had not achieved desired levels of success and had a challenging reputation that needed to be rebuilt. My mission and vision is to transform Neal into a school Durham sees as a safe, positive place; one where students graduate stronger emotionally, socially and academically.”

Using data and research, Fuga has implemented strategies at Neal to help achieve his mission and vision. The data showed that Neal’s eighth grade students were not meeting academic growth expectations and represented the majority of the school’s discipline issues. To combat these concerns, Fuga implemented single-gender teams in eighth grade. During the 2016-17 school year, the all-boys, all-girls and mixed-gender teams showed drastic improvements in academics.  Students showed a 10 percent increase in math proficiency, a two percent increase in English Language Arts proficiency, and a 12 percent increase in science proficiency. On top of that, discipline incidents of eight graders dropped significantly, with only a third of the incidents that sixth and seventh grade reported.

“For the past three years I’ve had the opportunity to watch an amazing transformation for the better in Neal Middle due to the hard work and dedication of Dr. Fuga,” said eighth grade counselor Makeda Miller.

Fuga feels it is his role to ensure that in addition to the students feeling safe and secure, that his staff does as well. He keeps an open line of communication with his staff, has an open door policy and shares his cell phone with all staff so they can reach him anytime. He works hard to maintain an environment of trust and respect.  And that work has paid off.  In two short years, 90 percent of the staff at Neal said the school was a good place to work and learn – a 22 percent increase from the 2015 Teacher Working Conditions survey.

“Dr. Fuga is one of the most intentional administrators I have ever worked for. He always keeps the best interests of students at heart in the decisions he makes,” said Neal math coach Sarah Huff. “He sees the whole child, community and teacher and selflessly works toward their growth.

While great gains have been made at Neal under Fuga’s leadership, he said, “Until every student exceeds their academic growth and every teacher maximizes their instructional potential, we have work to do.”

Fuga has worked in education for 14 years, spending five years as a teacher, two as an assistant principal and a principal for the past seven years. He earned a doctorate in Educational Leadership at UNC Chapel Hill as well as a master’s degree in School Administration.  Fuga began his teaching career in Pennsylvania after earning a Bachelor of Arts degree from Washington & Jefferson College in Washington, Pa.

The other two finalists for the award were Michelle Bell, principal at Parkwood Elementary and Dr. William Logan, principal at Hillside High.

Fuga will go on to represent Durham Public Schools at the regional level of the state’s Principal of the Year program.