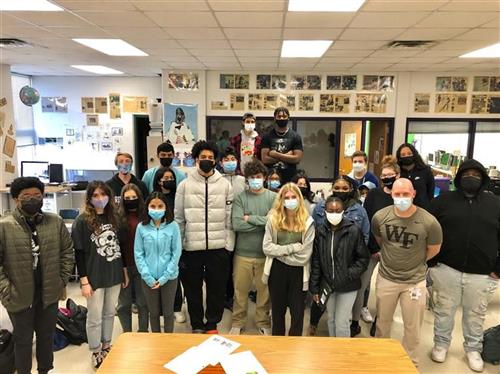 Riverside High School’s student-produced newspaper The Pirates’ Hook has been named an All-North Carolina newspaper in the NC Scholastic Media Association’s annual student media contest. The student journalists earned 14 of the more than 450 awards that were announced during the Association’s annual institute. Five of those awards were for first place.

Journalism instructor Bryan Christopher expressed his excitement for his students’ work as a high school entity.

“We earned all-North Carolina status, the highest tier for a student publication,” he said.

Christopher said the UNC-Chapel Hill for NC Scholastic Media Institute is a significant resource for him as an instructor.

“We’re really fortunate to have it in our backyard and make it even more accessible so that we can grow and promote high school journalism,” he said.

The first place entries were on wide-ranging topics ranging from opinion columns to review pieces, he said. The stories were very well-researched, and the work amplifies their voices, said Christopher.

“The kids were willing to just keep going back and revise. It just keeps getting better every day. The more they write, the more they understand what they’re trying to say. We leveled up this year.  The success of my program is a direct result of having really talented students,” he said.

But talent must be accompanied by motivation, he said.

“There’s a lot more to being a good journalist than just writing. You have to be curious, reliable, independently motivated, and brave enough to ask strangers difficult questions. I can’t teach some of those dispositions. It’s really a fun class to have,” he said.

Christopher said his students have participated in two other summer programs in sports writing and diversity for about five years. The Pirate’s Hook staff is also participating in the Ida B. Wells Society for Investigative Reporting, a national organization dedicated to increasing and retaining reporters and editors of color that also works to educate news organizations and journalists on how the inclusion of diverse voices can raise the caliber, impact and visibility of investigative journalism as a means of promoting transparency and good government.