To prepare a student for life is a teacher’s goal; to hear a student testify to this achievement is a teacher’s dream. Thanks to a partnership with the Ida B. Wells Investigative Journalism Society, Riverside High School English and Journalism teacher Bryan Christopher is living his ultimate dream. 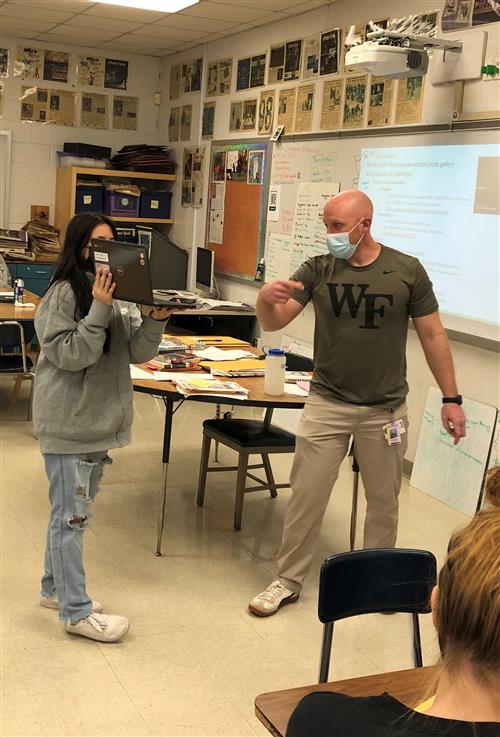 For six years, Christopher has led the production of The Pirate’s Hook, the school’s bilingual newspaper produced entirely by his students.The journalism class of 30 students has been under the Ida B. Wells Society’s tutelage this school year. They’re learning from two professional, working journalists who are serving as informal coaches, completing online courses and webinars, and pouring into investigative pieces with the fervor of their professional coaches. According to UNC-Chapel Hill’s Hussman School of Journalism and Media’s website, the Ida B. Wells Society for Investigative Reporting is “a national organization dedicated to increasing and retaining reporters and editors of color that also works to educate news organizations and journalists on how the inclusion of diverse voices can raise the caliber, impact and visibility of investigative journalism as a means of promoting transparency and good government.”

The society is named after Ida B. Wells, a pioneering black investigative journalist in the late 19th and early 20th centuries and early leader in the civil rights movement.

“To have an opportunity to cover the news and maintain freedom of the press is extremely important, always has been. Harnessing different voices to do that has become increasingly important to me as an educator,” said Christopher.

Christopher’s journalism class is composed largely of students of color-- about two-thirds-- so the partnership has helped the students to enlarge their presence as story-tellers and amplify their voices as students. They’re receiving one-on-one guidance from working journalists, gaining an understanding of the profession overall as well as how to properly curate facts and details.

The students overwhelmingly say that learning how to extract information credibly and communicate it successfully is not just a journalism skill, but a life skill. With that revelation, his journalism class has personified the district’s overall mission. Christopher wants to make sure his students perfect that skill so that their limitless potential will be unleashed.

His advice to them is, “Don’t assume someone’s going to get the answer to your questions if you don’t take it upon yourself to do it. Change begins with curiosity.”

Christopher is curious to see how the Ida B. Wells Society manifests itself in his students’ lives. “They will become more adept as journalists and writers who learn how to create an emotional connection by making stories people-driven using data and research,” he said.

Although he’s not been a full-time, formal journalist, Christopher is a freelance writer in addition to teaching English and journalism so he has– and shares– invaluable foundational knowledge. His student newspaper staff is representative of Riverside’s student population, and he says their perspective is critical to the architecture of stories with depth and perspective.

Christopher believes that the Ida B. Wells Society’s program will expand his students’ reach and footprint. “We need diverse voices to represent diverse communities that exist here and everywhere in America.  I don’t think we have that,” he said. His students are being prepared to fill those gaps.

Piper Winton, a sophomore in Christopher’s class, says the Ida B. Wells Society workshops have been helpful in teaching them how to make public records requests and fortify their portfolios.

“It’s so much fun to learn about research and interviewing. It’s helpful in building the story, and gives understanding to the reader. It’s also very helpful in other aspects of life,” she said.

Sadie Allen, also a sophomore, said it’s exciting to get an in-depth answer about extracting information.

One of the Society’s mentors is Thomasi McDonald, a crime and investigative reporter with the Indy Weekly.  Seasoned and committed to preserving the integrity of the journalism profession, his contributions have not gone unnoticed.

Senior Jacob Heindman, who plans to major in communications, says the idea of making an impact and causing change “through something I’ve written” is a realistic notion that Christopher and the Ida B. Wells mentors bring to the forefront for him.

“I like talking with Mr. McDonald. He’s a lot of fun, a really cool guy. Our work has been student-led up to now, and the Ida B. Wells Society gives deadlines, so even more is expected from us,” he said. Heindman noted he’s learned how to accept criticism constructively as well.

Junior Eden Richman concurs that this partnership is an amazing opportunity. “As high school journalists, we have a unique perspective. We are fully immersed in the community we report on,” he said. “But as kids, we don’t have a lot of agency or control. Ida B. Wells Society is really able to give a stronger voice to us, which is an important thing.”

That voice is strengthened through learning, according to William Rodriguez, a sophomore in the class. “It’s a great opportunity to learn about new things, how to write, how to ask questions, basically teaching you life skills,” he said. “It’s a great experience that will help me in my career with how to speak to people, and how to ask the right questions without crossing the line.”

Victoria Alcindor, a junior, had Christopher as an English teacher. As a first-time journalism student, she too has come to understand how journalism teaches life skills and how taking this class at this time is a privilege she doesn’t take for granted.

She’s proud that the stories they craft are “for students, by students.”  When the skills they’re learning are put into play, they become extraordinary stories. “They’re not regular stories. They’re interactive. I like how you get different perspectives through investigative writing,” she says.