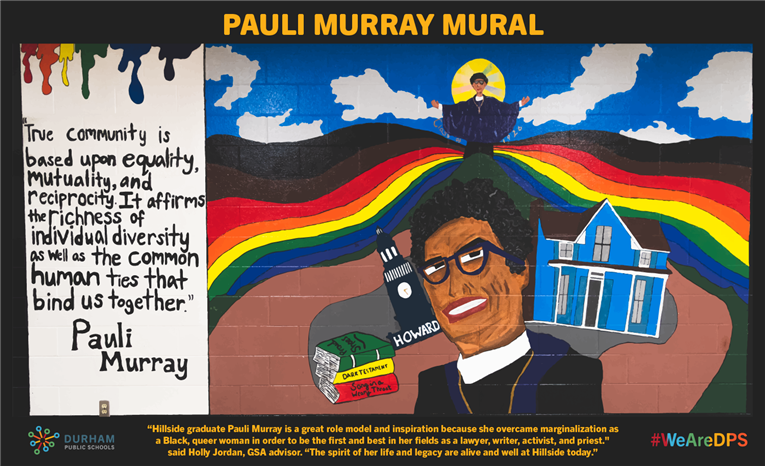 On Monday, June 10, at 4:30 p.m. at Hillside High School, faculty and students unveiled the much-anticipated Pauli Murray mural, created by GSA (Gender & Sexuality Alliance) in order to commemorate the life and success of the Hillside graduate.

“I am so excited that the Hillside Gender & Sexuality Alliance has created a mural to honor the alum, Pauli Murray. The mural was also made possible by a grant we received from the DPS Foundation and by the talent and hard work of the Hillside Art Department,” said Erin Batten-Hicks, senior at Hillside High.

Anna Pauline Murray was born in Baltimore on November 20, 1910. Pauli eventually moved to Durham to live with her aunt, Pauline Fitzgerald, where she attended Hillside High School. In 1926, she graduated from Hillside with a certificate of distinction and moved to New York City. From there, she went on to become involved in the civil rights movement, beginning a campaign to enter the all-white University of North Carolina. She later graduated from Howard University and published Proud Shoes: The Story of an American Family, a biography of her grandparents and their struggle with racial prejudice in Durham. In 1977, Murray became the first African-American woman in the United States to become an Episcopal priest.

“Hillside graduate Pauli Murray is a great role model and inspiration because she overcame marginalization as a Black, queer woman in order to be the first and best in her fields as a lawyer, writer, activist, and priest," said Holly Jordan, GSA advisor. “The spirit of her life and legacy are alive and well at Hillside today.”

Bringing Pauli Back to Hillside

The mural was created by students from across the school. It incorporated the diversity and sense of community at Hillside that Murray would like to have seen in her time, "This mural was entirely conceived and executed by Hillside students, and those who worked on it reflect the diversity of student identities that Pauli Murray talks about in the quote featured on the mural: 'True community... affirms the richness of individual diversity as well as the common human ties that bind us together.’" said Jordan.

The mural is now on display in the Hillside High School lobby for all students, faculty, and visitors to reflect upon and enjoy. “Having GSA as an outlet for me in high school was truly a gift. I have no idea how I would have gotten through my senior year without it. I will forever be inspired by the words of Pauli Murray, “Who am I? What do I desire? How am I oriented? Where is my sun, my North Star?”” said Breyana Almestica, senior at Hillside.