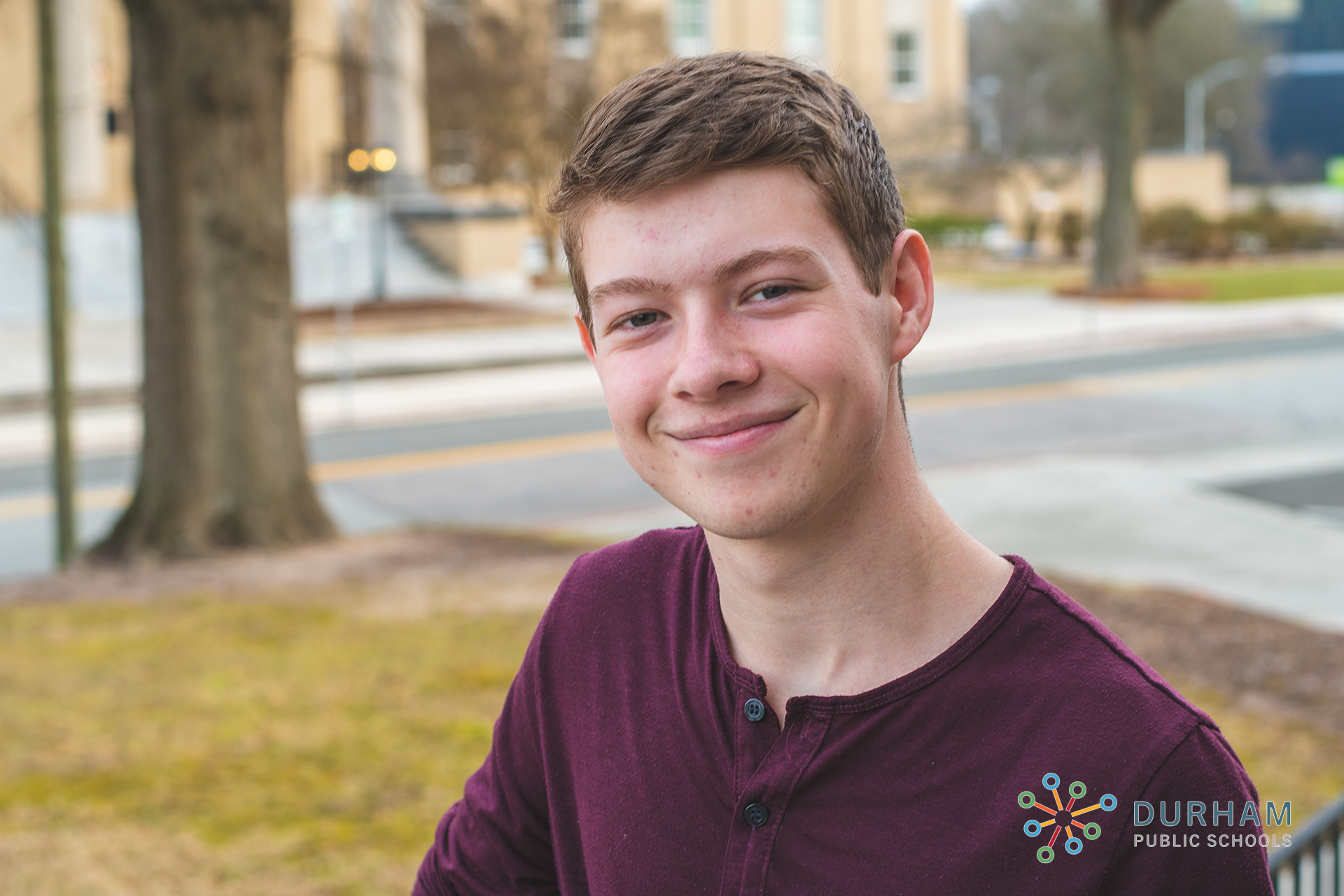 Our January Student of the Month is Colin McMillen from New Tech High School.

McMillen is a senior at NTHS and is described as a student who serves as a positive role model for his peers and demonstrates goal setting and achievement.

McMillen’s profound commitment to academic achievement has allowed him to dual enroll in college-level courses at Durham Tech since his first year at New Tech high school. He has worked extremely hard towards earning his associate’s degree and he is well on his way to being the first 4-year student at New Tech to earn his high school diploma and an associate degree simultaneously.

“McMillen’s leadership mindset, his willingness to help others, and his accomplishments have been an inspiration to his peers,” said Dr. Tounya Wright, NTHS principal. “He attended New Tech with some uncertainty but decided to take on the discomfort of the unknown to do something he desired which was computer science while taking on college-level courses. He has excelled to great heights by maintaining and continuing to work towards his academic standing of ranking #1 in the class and maintaining straight A’s all four years.”

McMillen has committed himself to serve his school community by establishing a computer science and coding club. He also tutors students in math and serves as a student ambassador.

In addition, he has completed internships at IBM and Triangle E-Cycling, plays baseball and the guitar, with hopes of releasing his first album to Spotify soon.

“A great deal of my motivation to be as successful as possible comes directly from my parents. Without all the encouragement, support, and help that my parents have given me, I would not be where I am today,” said McMillen. “My parents have challenged me to start taking college classes early, to put in the extra work to get the best possible grade in a class, and most of all, to be the best I can. Of course, everyone can be motivated by materialistic things; however, my parents have given me all the motivation I need.”

McMillen said about a year ago he got into writing and recording his own music and released his own song. He says this newfound passion could become a long-term career working with audio/computer equipment.

“McMillen has shown great integrity and commitment during his high school years and is well respected amongst peers, staff at New Tech High School as well as Durham Technical Community College,” said Wright. “No matter what obstacles appeared before him even during these unique times, and he certainly had some, he pushed through to make it happen!"

"He is humble, yet a take-charge person and has demonstrated his leadership ability by diligently implementing the mission, vision, and core values of New Tech High School,” said Camille Davis, NTHS counselor. “He is truly the epitome of a New Tech Scholar!"

Upon graduating from New Tech, he plans to attend North Carolina State University to study computer engineering; however, he has applied to other North Carolina state schools and is currently considering all options.

We are extremely proud of McMillen’s commitment to the community and to his peers at New Tech High School. The Durham Public School Board of Education is looking forward to honoring him during the upcoming board meeting on Thursday, Jan. 28.