Our October 2019 DPS Student of the Month is Elijah King from Riverside High School.

King is a senior at Riverside whose contributions to both the school and the Durham community are immeasurable and amazing.

King currently serves as the President of the Interact Club, and a member of both the Pirates Hook newspaper and the National Honor Society.  He is also the co-founder of the Environmental Justice Initiative; created to address the issues of climate change and its’ effect on the poor and minority groups.

When he isn’t serving the Riverside community, King can be found working throughout the Durham community as a board member for Made In Durham, Research Intern at The Samuel Dubois Cook Center on Social Equity at Duke, board member of Inside Out, member of the Southern Coalition For Social Justice Steering Committee, and a Youth-Engagement Strategist for County Commissioner Brenda Howerton. He also has served as a Senate Page.

According to Principal Tonya Williams, King “shows the best of Riverside High School. He is an empathetic leader who has a broad impact on both the school community and the Durham community.  He embraces the diverse community of Durham and desires to make it a better place. He is a true Pirate.”

She went on to say that King is the “epitome of a true leader: organized, empathetic, reflective, equitable. Because he cares so deeply about the community, Elijah has given so much of his time and energy toward improving it.”

We are extremely proud of Elijah King’s accomplishments and look forward to honoring him during our Durham Public Schools Board of Education meeting on Thursday, October 24, 2019. 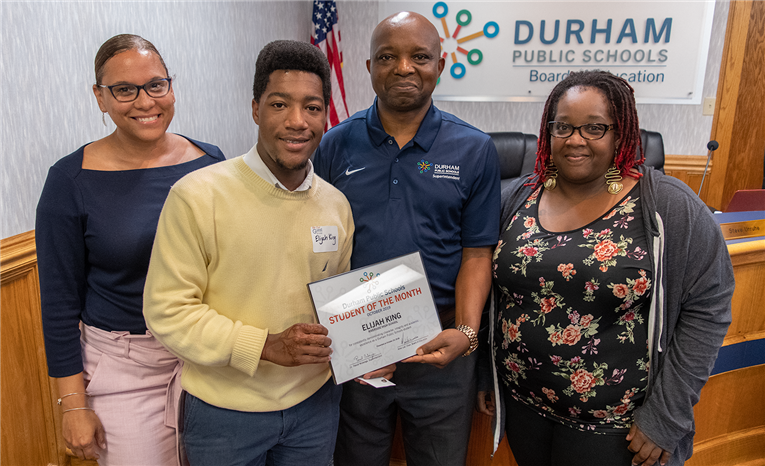