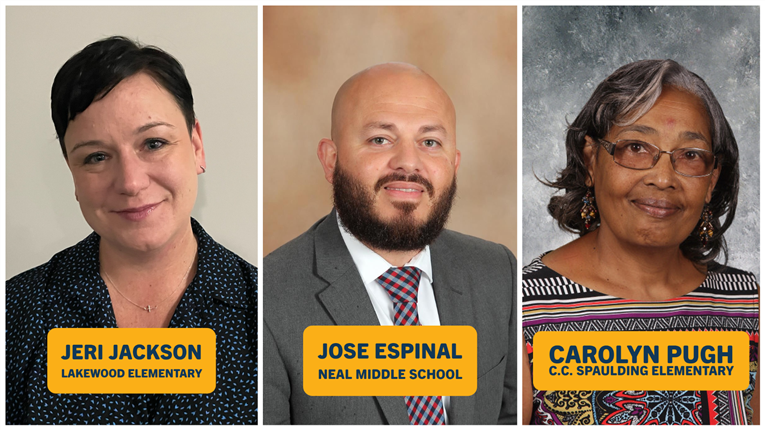 Jeri Jackson will be the next permanent principal of Lakewood Elementary School following principal James Hopkins’s move to start the new Lyons Farm Elementary School. Jackson has 20 years of education experience including six in school administration, most recently as principal of E.M. Yoder Elementary School in Mebane, N.C. An experienced principal with an intense focus on instructional design and a passion for working in a diverse community with a collaborative leadership style, she began her career as an elementary teacher, math specialist, and remediation teacher. She earned her Master of School Administration from UNC-Greensboro. She begins at Lakewood on March 14. DPS Coordinator of Equity Leadership and Strategy Jermaine Porter will serve as interim principal until her arrival.

Jose Espinal is coming to Neal Middle School as interim principal following the departure of Dr. Michael Fuga. Espinal is a longtime assistant principal, most recently at Brogden Middle School following a seven-year stint at Enloe Magnet High School in Wake County. He is a former district assistant principal of the year and a longtime visual arts teacher who has also been an active mentor and advocate for students of color. Espinal established an Equity Team at Brogden and was intentional about leading community outreach programs there. He earned his Master of School Administration from UNC-Chapel Hill. He begins at Neal on February 14.

Finally, Carolyn Pugh is returning to Durham Public Schools as interim principal of C.C. Spaulding Elementary School following the retirement of Jamie Carr. Pugh began her career as a teacher at R.N. Harris Magnet Elementary School and stayed there for the duration, serving as principal for seven years. The school was a two-time recipient of the National Urban School of Excellence Award, based on innovative curriculum and academic success. She begins at C.C. Spaulding on February 1.