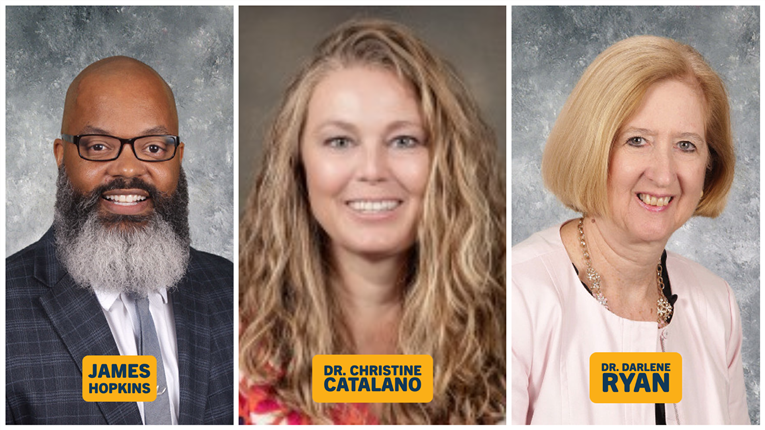 The Durham Public Schools Board of Education approved Superintendent Pascal Mubenga’s picks to lead Lyons Farm Elementary School and the school system’s department of curriculum and instruction at its meeting on Thursday, Nov. 18.

“James Hopkins has proven that he can foster a strong and healthy school culture, and I can think of no better person to establish a tradition of excellence at our newest elementary school,” said Dr. Mubenga. “He has modeled community engagement at Lakewood, and we will work with teachers, staff, and families in that active school community to identify Lakewood’s next principal.”

Hopkins will transition to leading Lyons Farm, including hiring and onboarding its first teachers and staff, on January 3. He earned his Master of School Administration degree from UNC-Chapel Hill.

Dr. Christine Catalano joins Durham Public Schools as executive director of K-12 curriculum and instruction. Dr. Catalano began her career in education as a special education teacher in Halifax County Schools in 1995. Since then, she has served as a teacher, academically and intellectually gifted facilitator, assistant principal, principal, and executive director in Nash County Public Schools. She earned her Ed.D. in Educational Leadership from East Carolina University. Catalano will join Durham Public Schools in January.

Finally, Dr. Darlene Ryan, assistant superintendent for elementary schools, announced her retirement from Durham Public Schools this December. Dr. Ryan joined DPS in 2018, where she won the 2021 Outstanding Administrative Support Award from the National Science Education Leadership Association for demonstrating exemplary support for science education. Her long career included such recognitions as the Distinguished Alumni Award for Excellence in Teaching from UNC at Chapel Hill and the NCSLA Herman Gatling Award for Outstanding Science Education Leadership.

“Dr. Ryan has been incredibly supportive to the elementary school principals under her watch,” said Dr. Mubenga. “She has had an outstanding career as a teacher, principal, and district leader. We’re honored that she shared her talents and drive with us and grateful for her impact on our students and schools.”