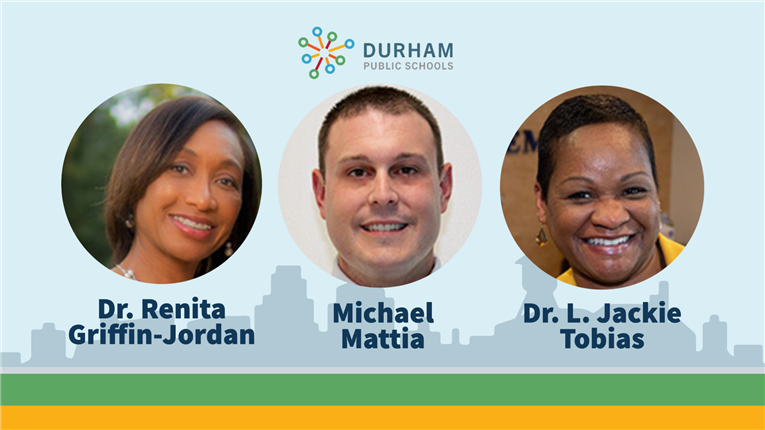 The Durham Public Schools Board of Education approved three accomplished district administrators to take new leadership roles at its meeting on Thursday, Sept. 23.

Longtime City of Medicine Academy principal Dr. L. Jackie Tobias will be moving to Durham School of the Arts as its next principal. Tobias was the 2020 Principal of the Year for DPS, having achieved a 100 percent on-time graduation rate at CMA every single year since 2013. Under her leadership, CMA has achieved outstanding academic performance and year-to-year growth at a specialty high school with an intentional focus on serving students from underrepresented populations. Tobias became principal of Riverside High School in 2011, then took over at CMA in 2013; she began her education career as a school counselor. She earned her doctorate in education from Gardner Webb University.

Tobias will be succeeded at City of Medicine Academy by Dr. Renita Griffin-Jordan as interim principal. Griffin-Jordan has been an assistant principal at CMA since 2018, serving three years before that as assistant principal over curriculum and instruction at C.E. Jordan High School. She began her education career as an elementary school and high school career-technical education teacher before becoming a longtime school counselor. She was a finalist for DPS Assistant Principal of the Year in 2020. She also earned her doctorate in education from Gardner-Webb University.

E.K. Powe Elementary School’s next principal will be current Pearsontown Elementary School assistant principal Michael Mattia. Mattia has served in that role since 2018, creating the school’s COVID-19 reentry plan, facilitating the School Improvement Team, and leading the Multi-tiered Systems of Support process. He has also served as an assistant principal in Chapel Hill-Carrboro City Schools, where he began his education career as a Healthful Living teacher. Mattia earned his Master of School Administration degree from the University of North Carolina at Chapel Hill.

“It’s always exciting when the best candidates for school leadership positions come from within the DPS family,” said superintendent Dr. Pascal Mubenga. “These are all experienced leaders who have taken on increasing responsibilities while forging deep relationships with their students, staff, and families. Great things are afoot for all three schools.”